December 30th 2017: 2017 has been a year of triumph & challenge. On March 4th 2017 as the 45th annual 1,000-mile Iditarod sled dog race took off in Fairbanks Alaska I wrote a poem called “Because I am a Sled Dog” to honour the many sled dogs who have suffered, been abused, and who have died as a result of being forced to run a thousand miles in grueling conditions in the Alaskan Iditarod and the Yukon Quest. Thus began my #BanIditQuest campaign to expose the suffering and exploitation of defenseless animals in the sled dog industry. As the New Year dawns I vow to continue until the last sled dog crosses the last finish line. #YQ2018 #BanIditQuest #Sleddogs #AnimalRights #AnimalWelfare ~~> https://bit.ly/2paXlV8  <~~

As I look back at 2017 I must also applaud the many brave women who have come forward to expose the perpetrators of rape, sexual assault, molestation, and domestic violence and add my voice to the war cry: “#MeToo”. We are the survivors. We have suffered in silence far too long.

December 24th 2017: On this frosty Christmas Eve of 2017 here in #Whitehorse #Yukon Marley and I want to wish everyone a safe and happy Festive Season and we ask that you keep the #Sleddogs in your thoughts and prayers. #BanIditQuest

December 6th 2017: Just returned from a two-day event called 'Laureate City' at the The National Arts Centre - Centre national des Arts in Ottawa where I performed several of my creative works including a piece called "Faded Rose of Yukon"  which had never been shared publicly. I also spoke out on behalf of the countless sled dogs who continue to suffer by being forced to run a thousand miles in the two brutal long-distance sled dog races namely the Alaskan Iditarod and the Yukon Quest. I closed my set with a performance of "Colour Me Canadian"  accompanied by my musical soundscape and playing my moosehide Raven Drum - the perfect piece to perform on Capitol Hill.

It was truly an honour to attend this rare gathering of celebrated poets from across Canada and to be afforded an opportunity to meet and listen to such a diverse group of talented poets! On day two of the event I attended a conference at the NAC to discuss ways to best promote, inspire, and support the literary arts in Canada. It was such a treat to perform in the newly refurbished NAC building and I also enjoyed reconnecting with Parliamentary Poet Laureate George E. Clarke who I last saw here in Whitehorse when we performed a reading together at the Yukon Government building in January.

November 28th 2017: Tomorrow I begin my journey to Ottawa Ontario to attend this exciting event!

*This poem was buried in a time capsule beneath Main Street Whitehorse in 1986 and has never been shared publicly until now. At the time I composed it back in 1983 writing anything less than a glowing tribute in reference to the Klondike Gold Rush would have been considered absolutely scandalous. -You could risk a blue ticket out of town. Today as you approach Dawson City the endless rows of tailings that scar the earth are still quite visible.

Dawson City – home of the famous Klondike Goldrush – was once my hometown and is presently being considered to become a World Heritage site. Many of the old buildings from the gold rush in 1897 still lean drunkenly as they shift into the permafrost as others slowly crumble – they just paint over the cracks and prop up the buildings every now and then.

British poet Robert W. Service famously captured much of the excitement of that era. In fact the history of the Klondike Gold Rush tends to overshadow the fact that the area is actually one of the most beautiful and pristine on the face of the earth today and has a history that extends far beyond the scrabble for gold. A history that began with the arrival of first nations who crossed the Bering Sea some 10,000 years ago.

To this day the quest for gold continues and as the hills are mined and re-mined over and over again, this poem remains buried in a time capsule somewhere beneath Main Street Whitehorse Yukon – to be unearthed as part of the 100th anniversary celebrations of the City of Whitehorse in the year 2050.

enchantress! sing the days of yore

of gold and men and mire

and smile again through broken teeth

upon your funeral bier

be-crowned by greed of man

of nuggets in a pan

so great you once exalted

a rose upon the vine

your enemy is time

once raped in youth and beauty

the lame excuse was “gold!”

your soul exchanged for booty

and left behind to mold

you sink within the cradle

that now becomes the grave

to sleep as those bereft you

no longer young and brave

your face is lined and tired

as man is yet inspired

your history to taint

in ignorance he fails you

exploits you to his shame

with clarion he hails you

though knowing not your name

your name was breathless beauty

while sleeping in the brush

and wonder of creation

before the klondike rush!

you sigh as mortals creep

to wake a worn old lady

who wants so much to sleep

your back is stoopt and bended

your grief may never end

to stand and die again

for you there is no pity

as seed of greed yet haunteth thee

I had a long-overdue visit with my old pal & Partner in Crime - well-known Yukon Artist Jim Robb!

I had a surprise visit from a little someone carrying this portrait of .... me! This oil portrait was painted by Yukon artist William Sinclair just before my investiture as Yukon Poet Laureate in 1994 - notice my official poet laureate pin is not yet on my Stetson.

I enjoyed a visit with some poet friends down at Queen's Park New Westminster at the "Poetry in the Park" event! I also spoke out about the plight of northern sled dogs and shared my poem, "Because I Am a Sled Dog" Click here to see the Video: pj johnson - ANIMAL ADVOCATE!

August 12th 2017: It was a great day to be Canadian and to welcome back to Whitehorse the Magnificent R.C.M.P. Musical Ride with a song called “Colour Me Canadian”  that I composed in 1995 to commemorate the 100th anniversary of the presence of the RCMP in the north to welcome the R.C.M.P. Musical Ride on their first visit to the Yukon. It was a pleasure to welcome them back to Whitehorse with that same song and visit with music legend Hank Karr.

July 1st 2017: It was an honour to be included in Canada's 150th birthday celebrations on July 1st 2017.  -Photo City of Whitehorse.  #Canada150 #StandForCanada #Yukon #PoetLaureate 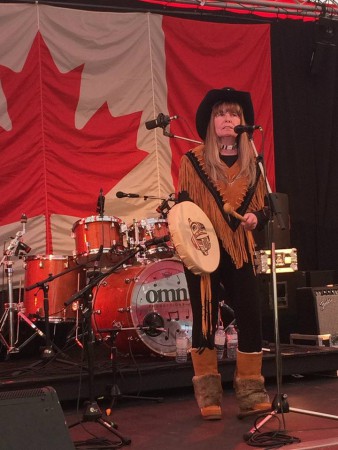 July 1st 2017 - Canada Day: Exactly 23 years to the day I was invested as the Yukon's first official Yukon Poet Laureate I was honoured to perform my song "Colour Me Canadian"  on what was also my country's 150th birthday! Because it was filmed at a live performance the audio is what it is. A good time was had by all!

May 14 2017: I am honoured to be featured in an interview in Bihar, India - An Interview with pj johnson, #Yukon Poet Laureate about her journey as a #Poet #Laureate.... authorinterviews.net/conversations/pj-johnson/

March 15th 2017: Today my manifesto exposing the ugly truth of sled dog racing is being featured in Bihar, India's current issue of the Ashvamegh Journal ~~> https://bit.ly/2mJLkGq .

I am also honoured to have my poems featured in Bihar, India in the March issue of the Ashvamegh Journal ~~> https://bit.ly/2nFfFFf

Today as the 45th annual 1,000-mile Iditarod sled dog race takes off in Alaska, I wrote this poem in honour of the many dogs who have suffered, been abused, and have died as a result of living the life of a sled dog and being forced to run a thousand miles in grueling conditions in long distance sled dog races - namely the Yukon Quest and the Alaskan Iditarod. I also wrote it to give a voice to the many defenseless sled dogs who continue to be abused and forced to spend their lives tethered on a 4 foot chain 24-7. It is further dedicated to the rescued 'Sleddies' who survived and in honour of those who didn’t.

because i am a sled dog

because i am a sled dog

i have no voice

i can only speak to you

and with the wagging of my tail

if i could talk to you

i would tell you that i worship you

and that my only wish

is to be with you

to be loved and adored

and to be wanted for who i am

i would tell you

i am a living breathing being

that feels love and joy and pain

and if i could only speak to you in words

i would tell you all these things

i would tell you i am here

to do your bidding

even if that means running a thousand miles

in a brutal race i didn’t choose to run

even if it means

for you are my world

and i only live to please you

i would protect you with my life

if you asked me to

all i ask in return

is that you love me back

January 20th: I attended an event hosted by The Yukon Government along with Parliamentary Poet Laureate George Clarke and Yukon MP Hon. Larry Bagnell where I shared my composition, "Colour Me Canadian".  See Video at: Videos by pjj